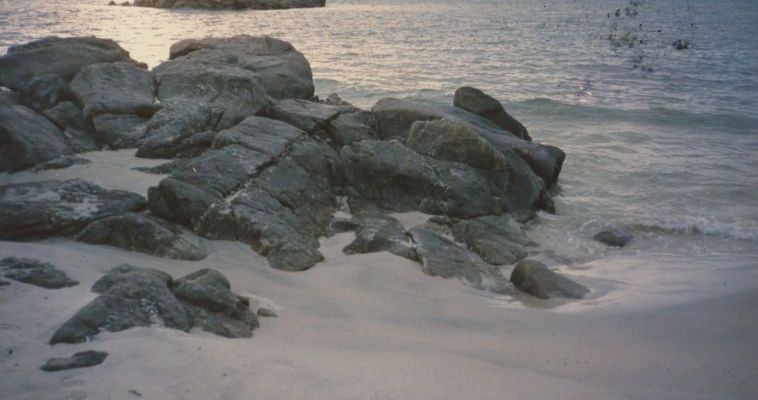 The Route of the journey very approximately, Day to day accounts will show the exact route taken
Photographs and slides were taken on a dodgy old camera, so quality is not of the best, and there are images that I pasted into my diary at the time, taken from leaflets and information I collected as I went about the areas travelled through

Northern France to Belgrade and Back
Summer 1984
This is my diary account of a 6,500 kilometre cycle journey from the North Coast of France to Belgrade and back. Originally, we intended to only cycle to Greece and then fly back, but when we were nearly there, in the middle of Yugoslavia as it was then known, we started to find the deprivations of this part of Europe too difficult – we couldn’t get enough to eat, it was extremely hot and dry, and we got food poisoning. So instead we turned around and cycled back a different way through the green wet mountains and home. I kept a daily diary and drew the line of our journey onto the maps. Also a cycle computer was used to measure daily distance and total distance
The account is quite long as the journey lasted around 4 months. Occasionally, I have added comments to the diary in places and these have been put into square brackets

Friday June 1 1984 writing whilst sailing to Roscoff
Preparing for the trip, I felt that I knew what to do; that all previous experience led up to this, – packing was easy and minimal, (well….) loading the bikes was easy, it had been done many time s before, and there was no extra large amount of luggage to reflect the fact that this time it would be for 4 months.
On our last day back in Warrington we went to buy last minute items, and hurried away as Princess Diana was visiting and there were crowds everywhere. [As Princess Diana was still alive then, one did not take the opportunity one should to see her.]
The cellar is sealed up with all our things in it. Late at night we realised that the frame for the bar bags was missing and we didn’t know where it was. A frantic search through the sealed up cellar contents ensued to no avail. Eventually it turned up at a friend’s house and was retrieved the next day.

Plymouth
The route to the Plymouth had been along a busy A road that was fume filled and frightening. At a giant roundabout we turned into a quiet narrow lane, cycled along a river, and arrived at the campsite.
Woke up to mist and dewy air in a neat and well-provisioned Plymouth campsite. Taking down the tent we were careful to avoid damage to a large snail. We cycled to the ferry, another journey where the cyclist feels threatened by the large amount of heavy, fast traffic
Later – Santec near Roscoff, Finistere, France
The ferry journey took 6 hours, and the sea was rough, broadside swells occasionally sending piles of plates and bottles, rubbish bins, chairs and people flying across the room. Our bikes were stowed at the back of the hold, so we had to wait for the lorries and cars to move but then decided to make a dash for it alongside a great lorry – it was a tight squeeze, and when the lorry started its engine, we were nearly gassed from its exhaust fumes that stung eyes and lungs. [This is one of the unrecognised hazards of travelling by bike on a ferry. No-one considers that you are stuck there, unprotected by windows or air-con with a whole boat full of fumes blowing at you.]
We arrive at a spit of land sticking into the sea just east of Roscoff. Dazed, we stopped on the quiet harbour front, where a woman was picking mussels and bells were tolling. Roscoff is a pleasant place, old church with carved gargoyles and figures, if a little wet.
A heavy fall of rain means that supper is inside, comfortable and spacious in the new roomy tent. The site is right beside the sea, and there are beautiful glimpses of white sands and turquoise –grey sea, dark pines. The site is municipal, with separate enclosures, lined with trees and a special stand of pine trees to shelter the bikes from the rain. Later, in the pouring rain we walked along the spit to the end and looked out onto a sea full of rocks – a bit like the Scillies. 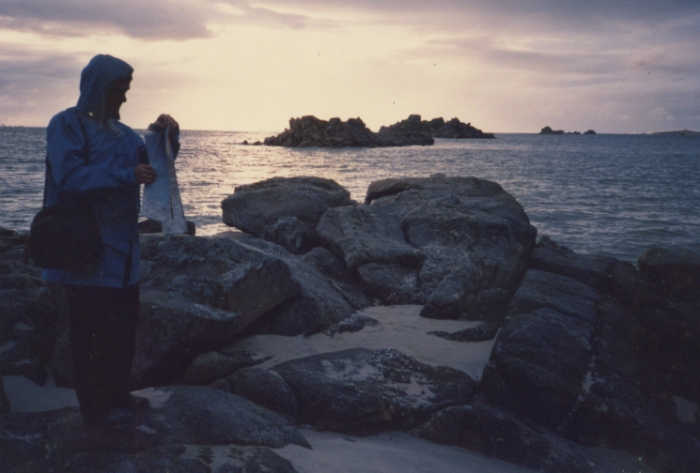 Roscoff, with Santec and campsite to the south west

the view over the se at Santec