The first hill is hard on yesterday’s muscles, but they soon warm up. We were away by 7.45 am. Another faultless blue sky soon clouds over and we begin by turning off a main road onto an undulating lane. There are so many trees in Brittany, green meadows and fields and trees; at times I felt that I wanted to get up over them and look at the view, but never could.

I become ratty after an hours riding with no breakfast and we stop for a snack. Soon after that we arrived at our breakfast place- Glomel, a bar des sports where we were pleased to see a French couple eating their own croissants, we also. Soon we came to a sign – ‘menhir’ up a green, hedged path beside a white house, and find a massive monolith 30 feet tall. This, I find later, is the tallest menhir in Brittany, standing 8.6 metres high. We sheltered beside it to change into wet weather gear, and soon it began to rain hard, very hard. Later it turned into hail, big stones. All day we were putting our things on and off, stopping every few miles .

We decided to try to get all the way to Carnac, so continued extra miles to Bubre, where an old woman told us from a window that there was a café open. We ordered cheese sandwiches from a friendly girl, who went out to buy the bread for them, accompanied by wine because it was cheap, – 15p a glass, and coffee. Starsky and Hutch in French on the TV.

Continuing along more green and tree lined roads, yellow butterflies struggle in the strong southerly winds, jays flit in the sun, and woodpeckers undulate over the rutted lanes. I had the impression that I was following many rivers down towards the sea.
Outside the café after lunch, we met a man who was going to cycle to South Africa and back, via Spain and Portugal, beginning in September. He was friendly and said he would write. We talked in French and English for a while.

I take the opportunity to sit below a great pollard tree in the sun while Guy tightens a loose and creaking crank. We swoop down wooded valleys and into towns with wide empty places in front of grey carved churches. The campsite in the town before Carnac isn’t open, so feeling tired, we continue. A sign tells us of the Camping du Lac, et de la Riviere, but not how far they are. It seems like miles. We choose a place beside a big triple-trunked tree for the cycles, looking out over the lake in the warm sun. We are now on the South Coast of Brittany, where we have been told the weather is much warmer and more temperate than in the North. 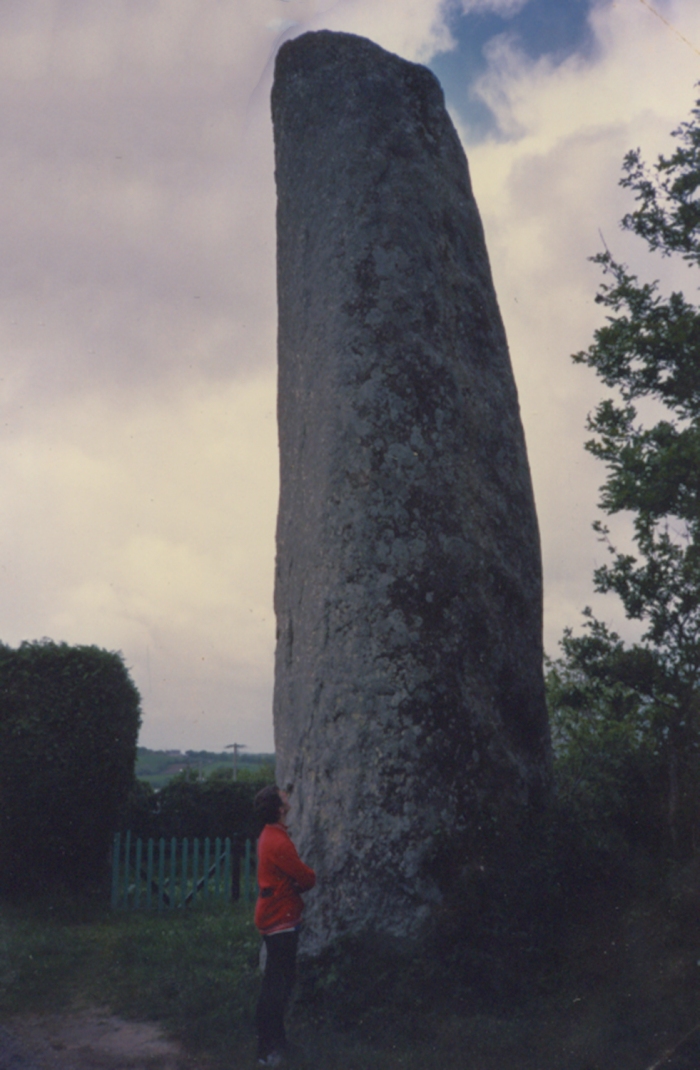 Close up of a stone at Carnac