El Chorro is an unusual location, not necessarily easy to like the first time you see it.  Contrasts co-exist easily or uneasily side by side, and curiosities abound.  These are some of my favorites.

The Bedside Gecko.  He used to pop up from just beneath my pillow and run about above the bed.  I dont mind geckos but somehow I didn’t like the idea of him running over me when I was asleep, so he was persuaded to dart out of the window. He came back once, running upside down with sticky feet suspended from the ceiling, and then he was gone. 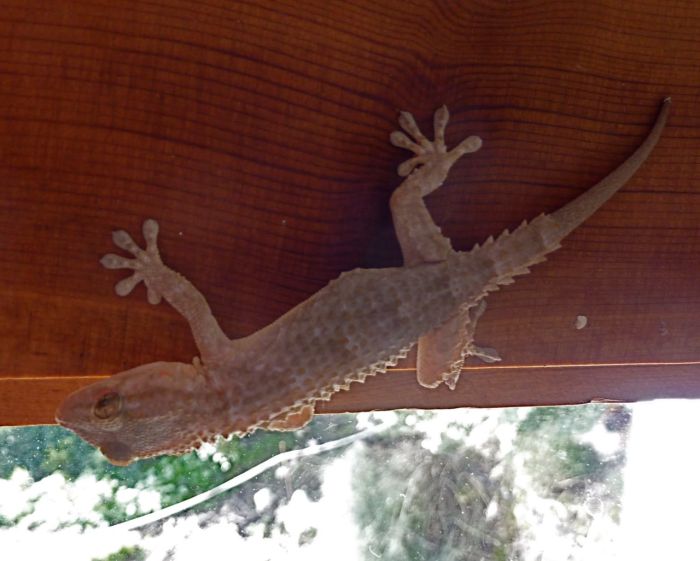 The Danger of Death

Everywhere you go in El Chorro there are reminders of the delicate balance between life and death, between the grim and the lovely, so if you stop at the station cafe, you will soon hear the story of the murder that took place there, while your bike is parked beneath the lightning bolt signs to remind you that danger is close by. 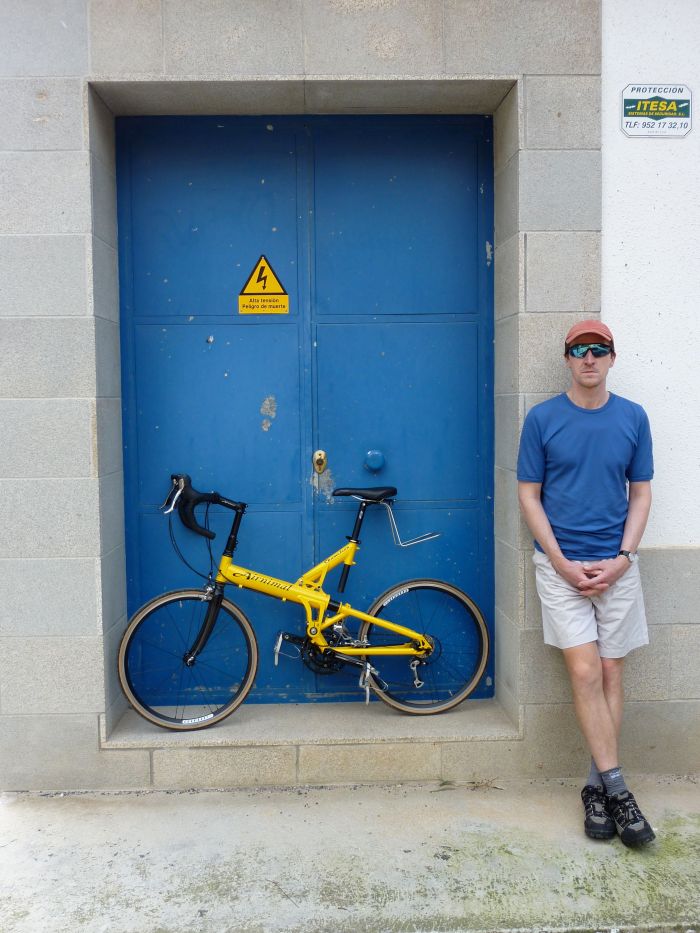 The pale green opaque waters of the dammed river Guadalhorce dominate most of the views of El Chorro.  The dam, its conduits and workings contrast strangely with the wild limestone terrain of the gorge, valley and cliffs. 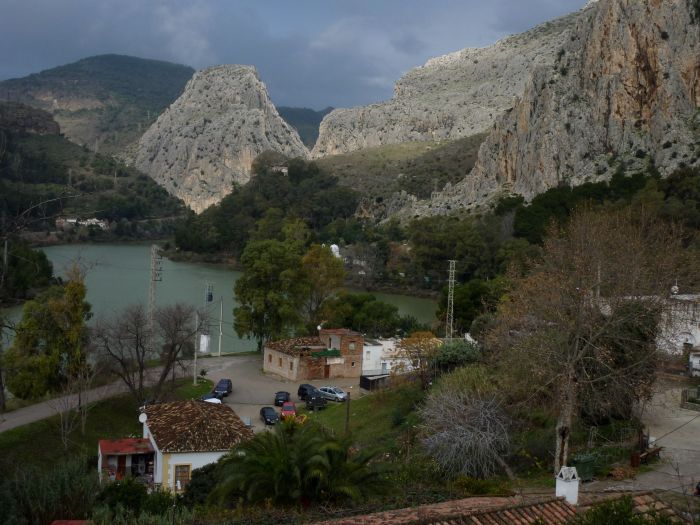 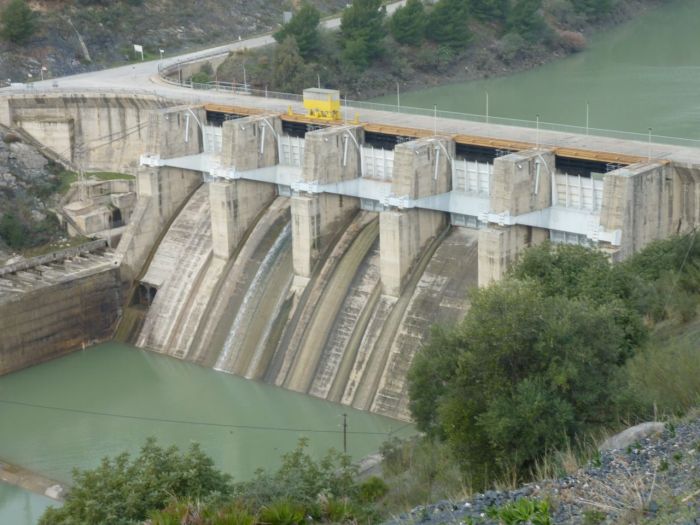 The Railway links this small town with Malaga and Seville, not forgetting Bobadilla, and it is via the railway that access is gained to much of the climbing and also to the dangerous Camino del Rey.  At busy periods, there are guards at the entrance to the tunnel, waiting to fine you for trespass, so it is always with a feeling of trepidation that you enter or leave the tunnel.  It is a good idea to wait until you see Spanish people entering and leaving without bother before you go.  Wonderful bridges have been built for the railway and from the tunnel are some of the most exciting views of the gorge and the camino. 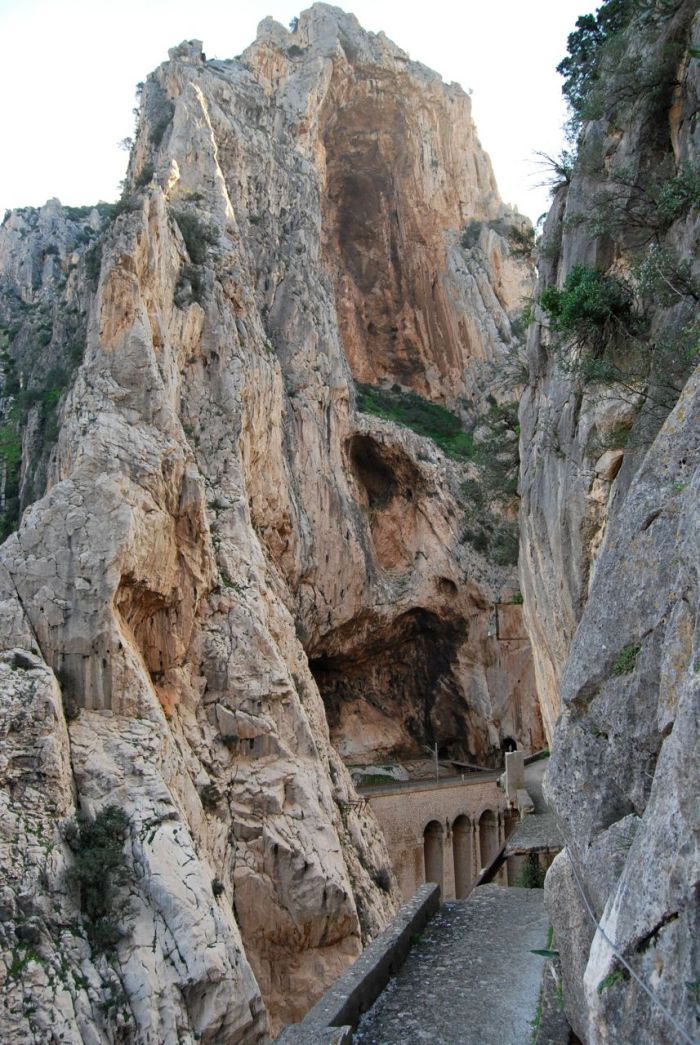 View of the Tunnel from the Camino del Rey 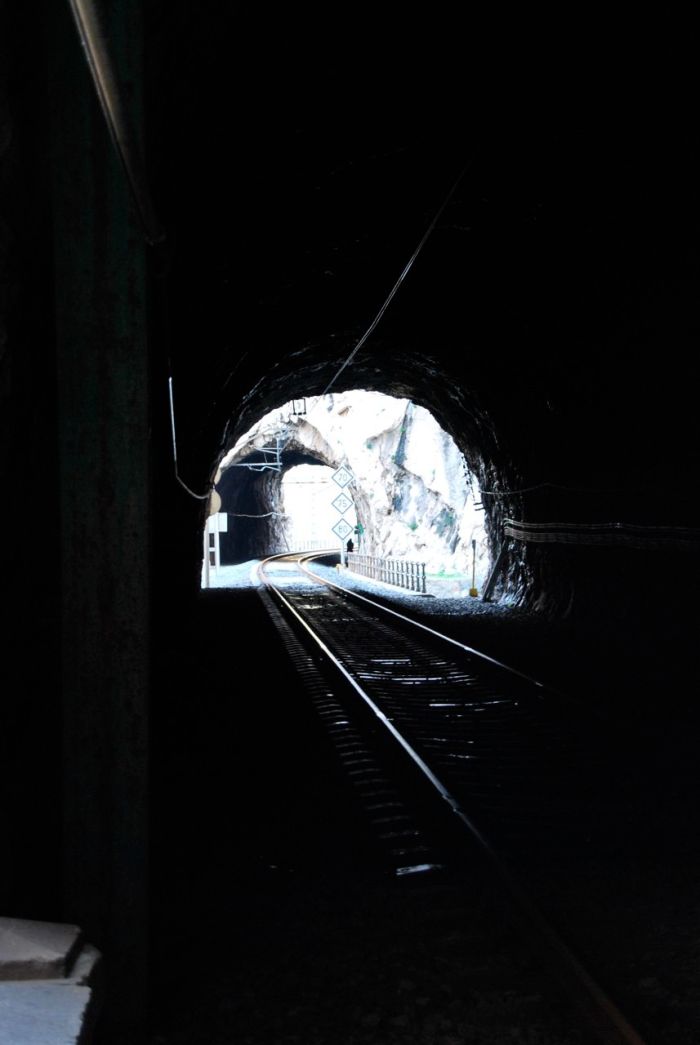 In the railway Tunnel, el Chorro 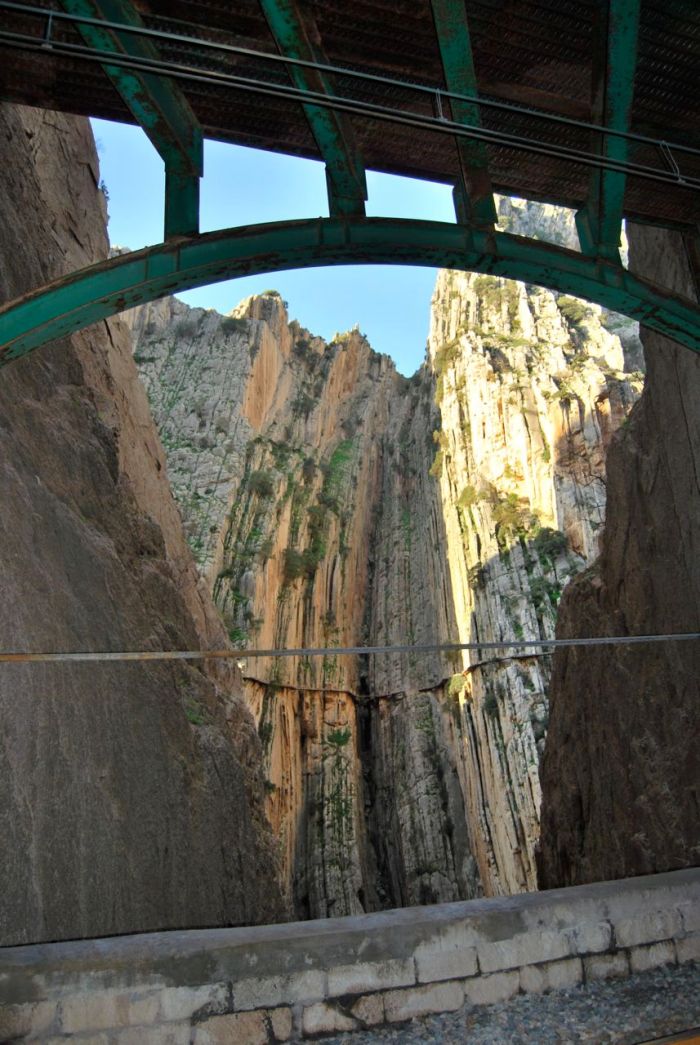 View of the Camino del Rey from the Tunnel

The Old King’s Walkway, built for King Alfonso 13 to admire the handiwork of the dam and its workings, now disused and broken, offers a great challenge to climbers, clinging hundreds of feet up the side of the gorge’s cliff walls, full of holes and exposure.  In order to prevent the adventurous form accessing it, the government chopped off the end section that links with the railway tunnel, making access more difficult, but not impossible.  The Spanish government are about to turn it into a tourist attraction, renovating and making it safe for all.  I feel privileged to have walked it in its old decayed state. 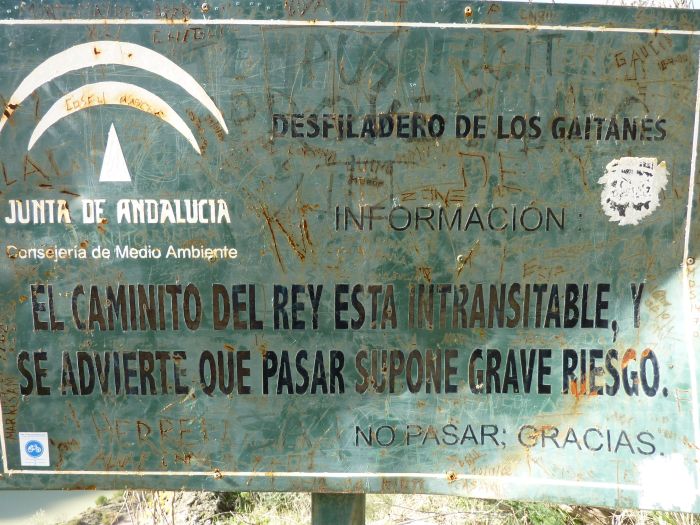 The Chopped end of the Camino

Many of the building have fallen into disrepair, forming a sombre backdrop or foreground to views of the austere gorge walls. 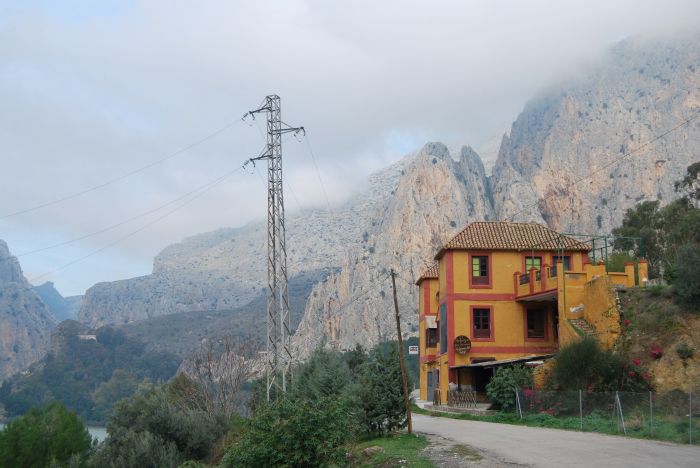 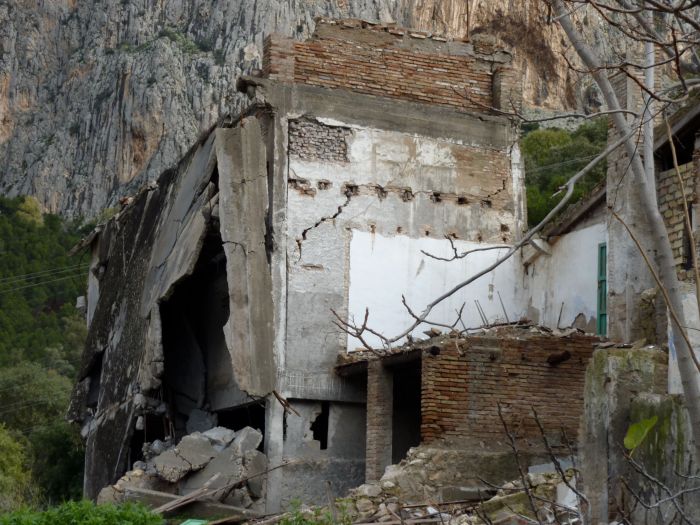 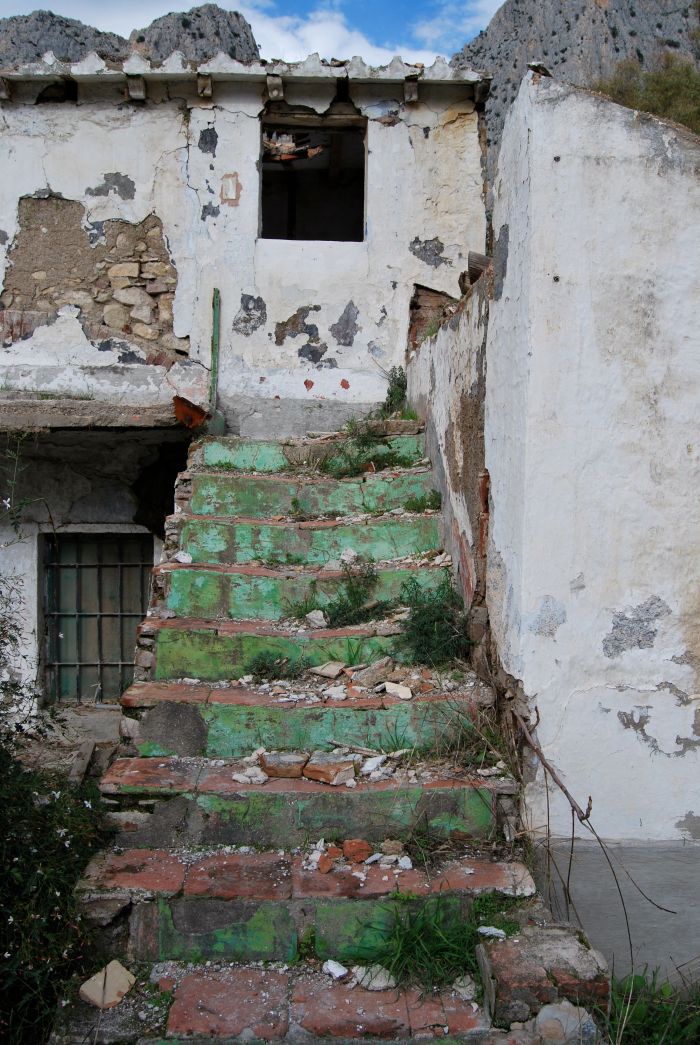 House in the upper part of village, El Chorro

Natural Caves in the cliffs around El Chorro are inhabited, many of them by climbers, and although the footpath may go right past the terrace of these dwellings, one feels like an intruder passing by, trying to steal a glance into to dark interior to see what might be in there, and how far back the caves go.  Maybe there are secret tunnels right to the climbing.

This landmark was our view from the Finca, having a grand house on the top surrounded by its collection of tall trees, The mood changed with the light but always it looked mysterious.  Large dogs were always ready to greet any intruder at the gate, so there was no question of going for a closer look.