Weds 26 June 3 2013 Three Passes Cycle Ride
Passo Valparola 2,200m
Passo Falzarego 2117m
Passo Campolongo 1875m
Arise very early and set off cycling at 7.15 It is very cold, only about 3 degrees. First we cycle part way up the Gardena pass to see where we will be staying next at the Belvedere Hotel. Then turn around and on down to La Villa and up to St Kassian, for coffees in a rare bit of sun before continuing up the Passo de Valparola and the Falzarego Pass which all seem a very long way and pretty steep.  It is cold cold cold. A wild rocky section between the 2 cols and the road junction with a War Museum in an old Fortress building which was built in 1897 to defend the southern confines of the Austro-Hungarian Empire. The Valparosa Pass, from this direction is a rising pass, but unfortunately I thought it was the top and had been having a big effort to get there to photograph Jim arriving, so when I hear the news that there is yet more uphill I am not happy.

Going down is relatively quiet as much of the traffic peels off to Cortina, but is is extremely cold. Everywhere we go there are teams out mending the ruts in the road ready for the Maratona. We stop halfway down for coffee in a lonely backwater chalet no view, just trees , no neighbours….
A corniche road leads along to Arabba, for too long, and with rain threatening. Arabba is where the start and finish of the Sella Ronda Day was and then it was filled with festivities. Now quiet, it provides us with goulash to power us up the final pass, the Campologno,  taken this time from the other side. By now I am finding this very hard, but finally we get to the top and whizz down the other side into Corvara, and carry straight on up the few hairpins to Colfasco, feeling that if we stop at all we might never start again.

Later we walk out on the back road above the valley to a restaurant with beautiful views of the mountains, and nobody else there. At the end of the meal, the Grandma comes and sits next to us, doing puzzles until we are ready to leave and then produces the bill, ready written. Beautiful barns stand around in undulating meadows as we walk back. 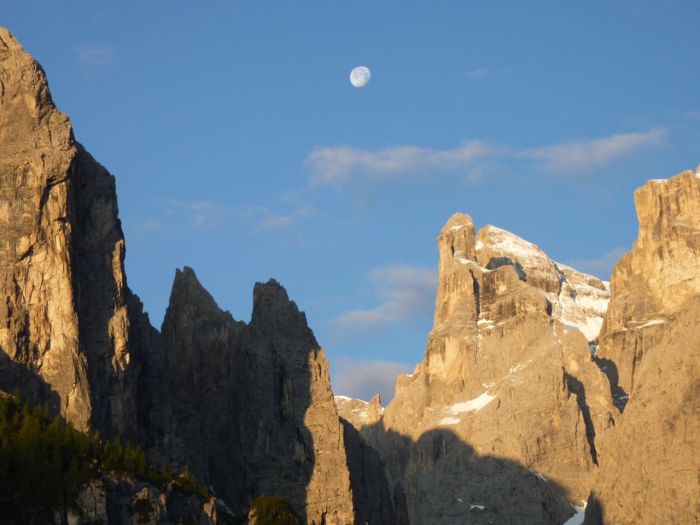 the Moon that greets us every morning 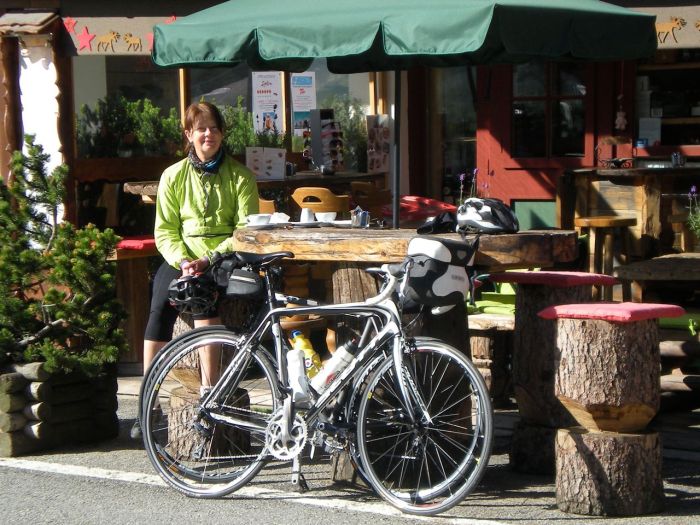 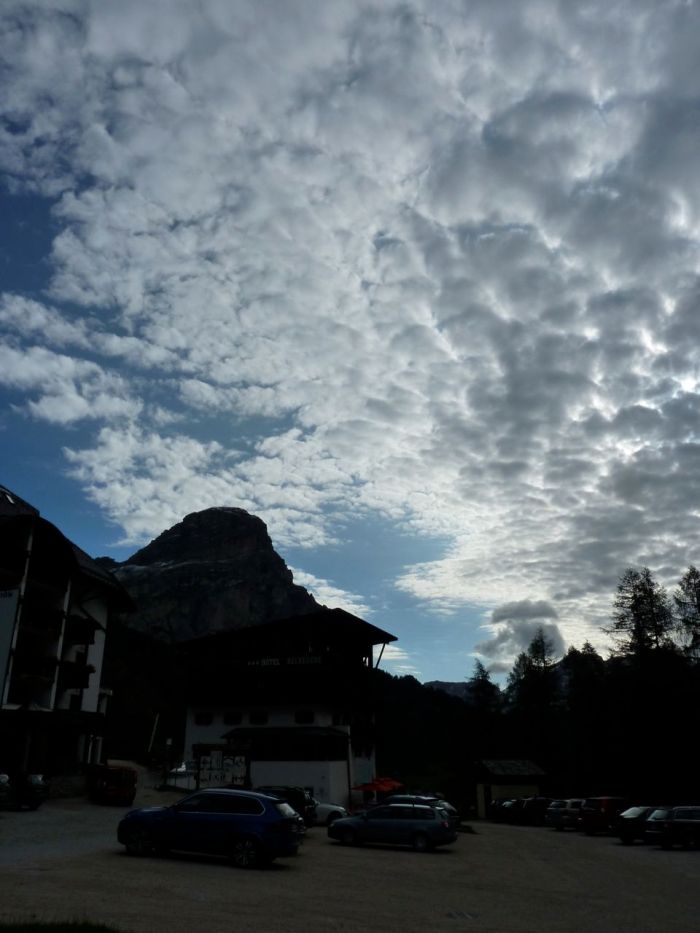 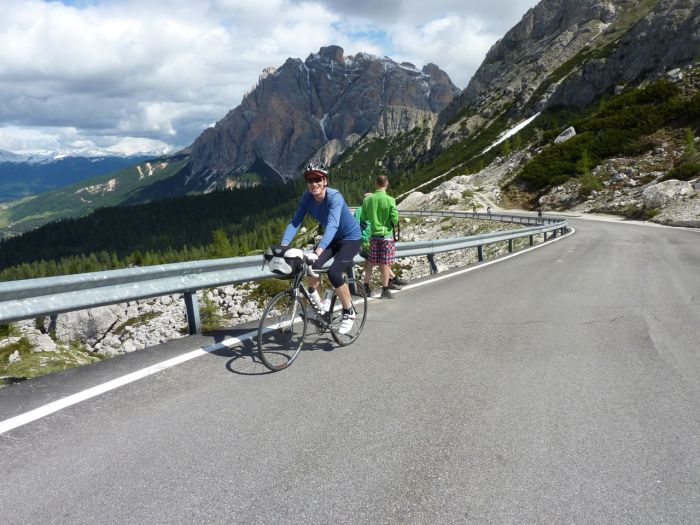 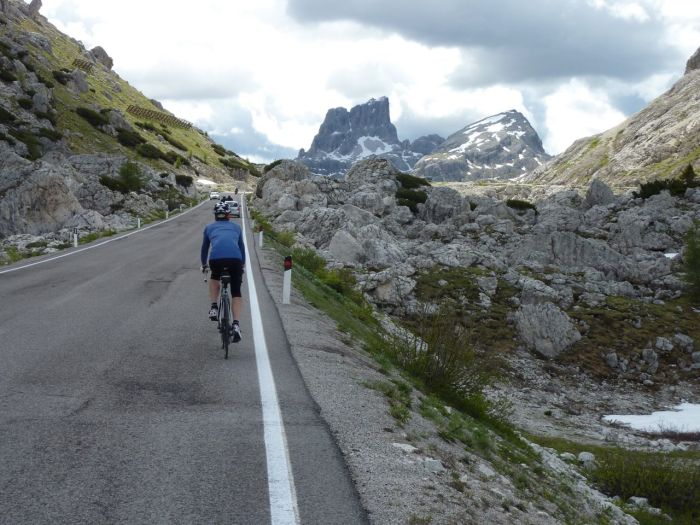 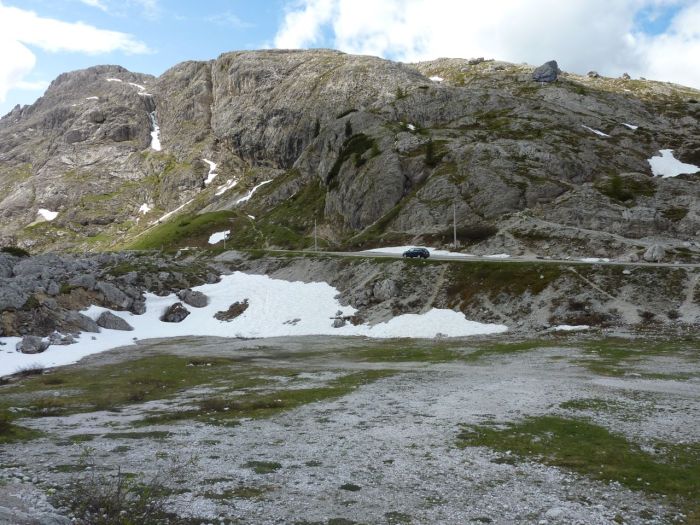 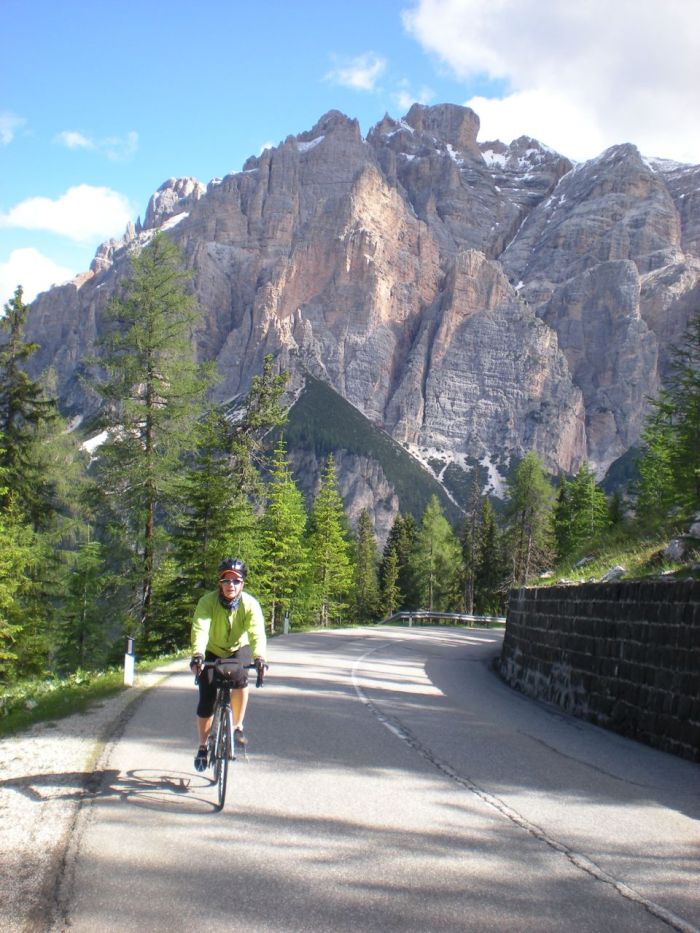