Tour de France Col de la Madeleine.
We make an early start at 6.20 with a ride down 2,000 feet of dark cold  hairpins to Aime. With no time for any breakfast or even a cup of tea, we whizz down to the station to get the train to Notre Dame de Briancon. The trains have been suspended so that is a bit disappointing. The reason we want to take the train rather than riding is because there is no way of avoiding the large motorway-like road in the valley bottom as it enters a fearsome long tunnel where there is no cycle path.  So we end up having to ride on this road, through the big Moutiere Saix tunnel. Lorries thunder past, cycle lanes withered and disappeared.

The tunnel is full of dust fumes and a loud incessant roaring of all the lorries and cars joined and magnified by the concrete dome above them. Just at the end of the 1.8 kilometre tunnel I find that my shoelace has wound itself round the pedal so that I couldn’t turn my foot any more. Jim had to disentangle me. I felt very lucky that this hadn’t hapened inside the tunnel with a giant lorry alongside in a narrow lane.

There follows a bit of route finding after a breakfast in Moutier, as we try to keep off the big roads. Soon we arrive at the foot of the Col de la Madeleine where almost immediately and earlier than advertised, police were stopping the traffic. From that point onwards we cycle on car free roads. Many pedestrians are marching up, hundreds of them, armed with tents, baskets, umbrellas, mats, rugs, wine beer, chairs and wheeling larger items. All this is at 8 am in the morning, while the race does not come through until 1, showing what a big day it is and how much people want to be in the right place to view the peloton.

The sun is out and it is starting to get warm, the road ascends through trees, has a flatter section through meadows for a while. We see our friends as we go, passing us or having stopped for coffee. There are some steep sections of 10 or 11 percent and many hairpin bends. Much of the route is lined with people even now, cheering us on, dressed up, waving flags, pushing us up the mountain, sitting drinking, barbecuing, making tea, offering us wine, and singing.

We carry on past the others to the top, entering into the cordoned areas from which there is no escape until the event is over. Here, we remain by the barriers, catching gifts from the caravan and then had a drink at the summit auberge. We wander through flowery meadows with the bikes to find a good vantage point. From here we can see about a mile down the road and three sections of hairpins directly beneath us. In the distance, rises the majestic white dome of La Grande Motte. While we picnicked we started to get excited as the advance cars clamoured through, and then the peloton. Accidentally and without seeing him, I captured Bradley Wiggins in his yellow jersey leading a small group to the top.

An American couple have driven a little old car over the grass to sit in the meadows. After the end we start the procession down; all the cyclists in a big gaggle and a throng of camper vans luckily all holding each other up, so keeping the road clear. Cyclists are bombing past us, often on completely the wrong side of the road and traffic is starting to come up from the bottom of the mountain.

Shortly, the traffic stops moving and we hear sirens; as we approach a dip in the steep descent, we see there has been an accident, between a cyclist and a motorcyclist. The cyclist seems to be badly injured, lying beside a very low stone parapet above a deep gorge. We are shocked and saddened that this has happened and carry on down the hill gently and slowly hoping that the cyclist will be OK. 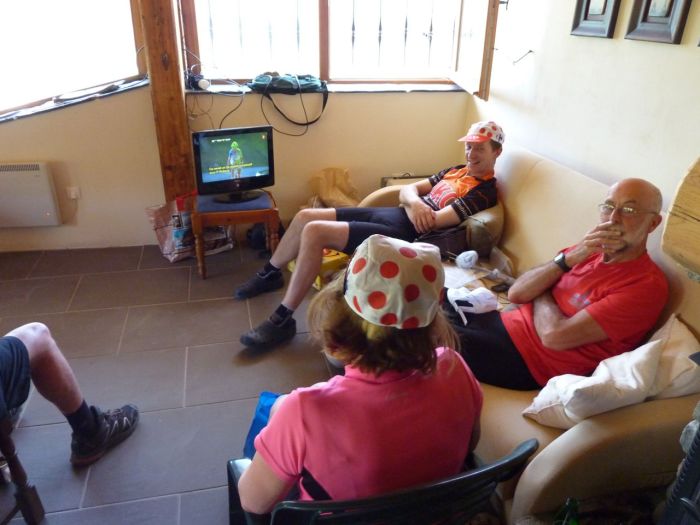 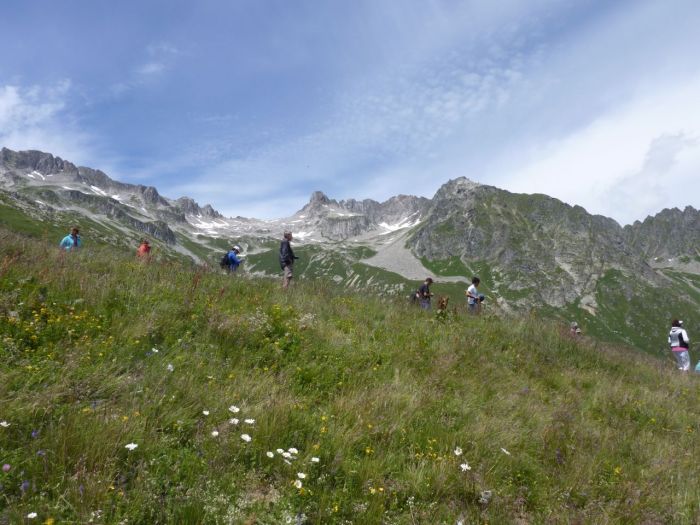 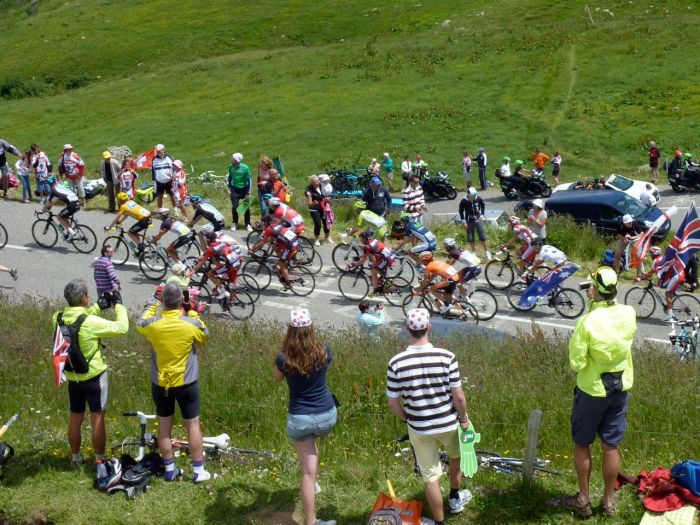 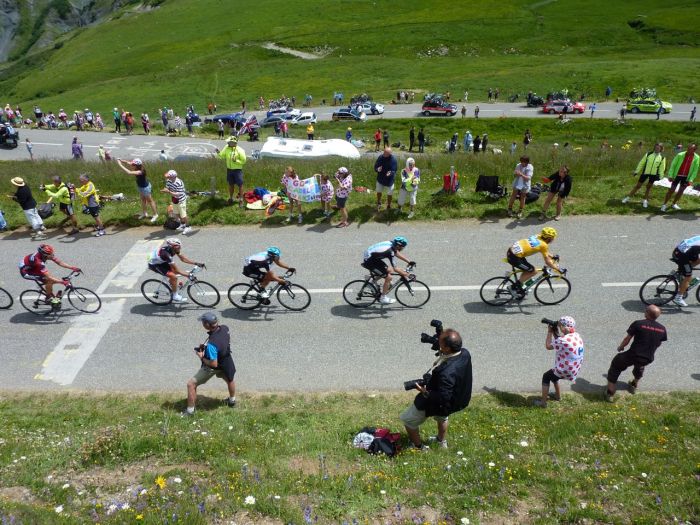 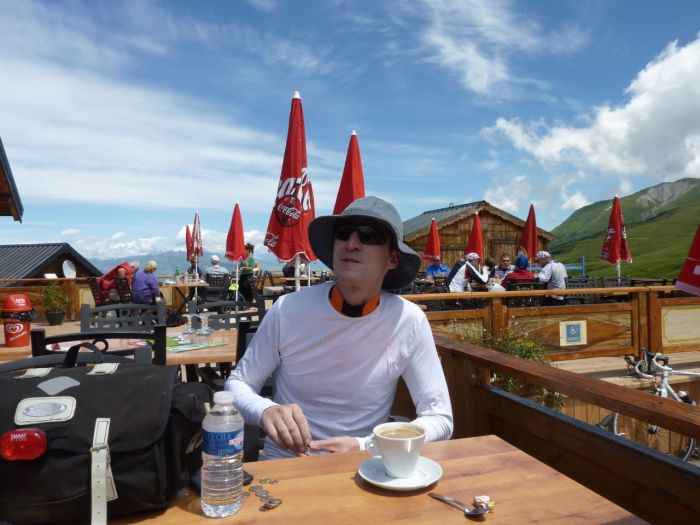 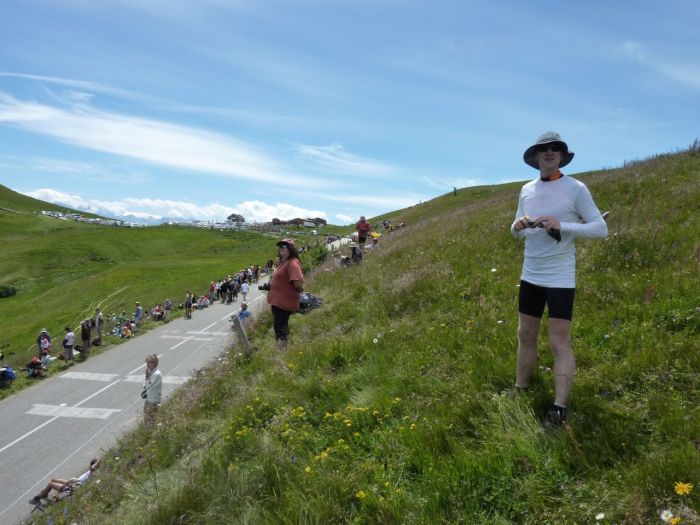 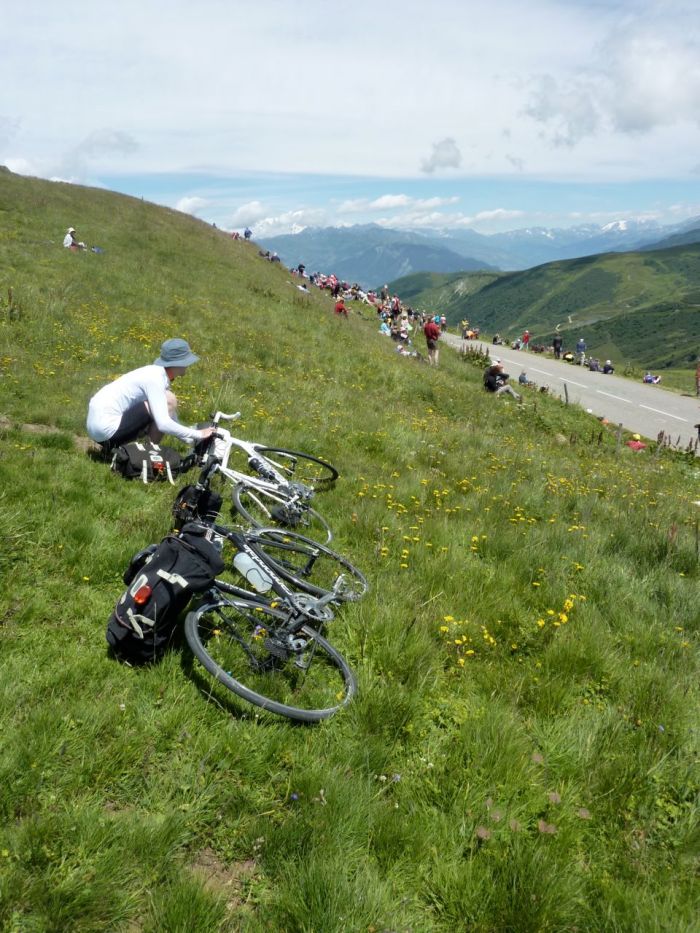