I read an Italian magazine- Nattura, articles about butterflies that I have just seen, and the alps, while a square of sun falls first onto the bed then in the bathroom. Arising, I go and sit on the balcony, smelling the scent of wet soil and trees.

The maid is in the kitchen preparing breakfast- a pot of tea, served with hot milk, toasts and delicious Italian butter. Luigi has bad news today, his windsurfer and a bicycle have been stolen from his garage, and also it rained so heavily in the night that his water experiment is spoiled.

He tells us more about Padua over breakfast, fetching a map and taking it to the attic so we can orient ourselves by the spires and domes. We load the cycles and go straight from his gate into the cobbled streets of the old city centre.

We decide to go and camp at Luigis farm because it looked so peaceful. So we cycled out there, – the rain clouds have got there before us, gathering up against the hills. We pitch the tent under the barn roof, and the rain falls heavily.

Two Italian farmhands who had been drilling the soya bean field, come to the barn, wearing binsacks, they both have blue eyes, One who says he is 62 talks of the days when he cycled over the Alps to France. He had gaps in his teeth He was able to make himself understood by signs and actions He also spoke a guttural German leaned as a political Prisoner of War in Germany, and he had English friends who had been shot down, but he always spoke to them in German.

As he left, on his tractor he shouted out behind him, ‘I envy you because you are young’ I felt a sad warmth for him. The other man was quieter, watched me while I listened to his friend and saw that I understood, he was more modest and his eyes were bluer. We said a few goodbyes, to Luigi, (he kept forgetting things and came back to take photos of us) After supper, I wanted only to sleep, and went to wash the dishes at the pump which comes from a well and is Luigis favourite water. 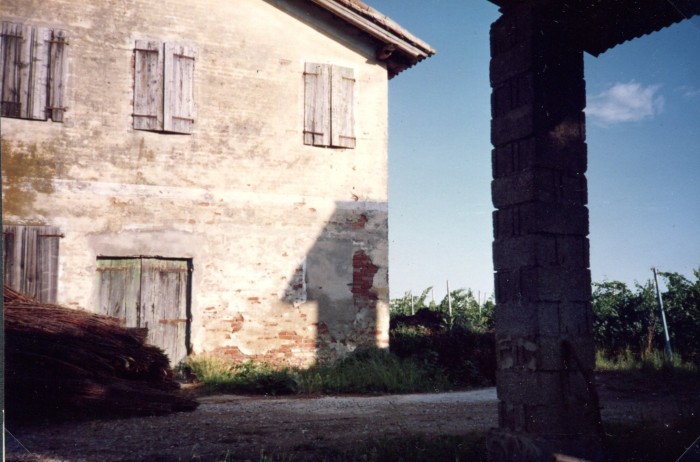