The Sprengisandur Wilderness is so barren that every time a discernible feature appears I spring up with the camera, to record this unusual occurrence. Some rocks, a valley, a pool of milky water. Eventually a very large dam of pale green water receding forever into the mist, which is punctuated by pylons. The road improves, the bus whizzes over the rutted surface, flying across narrow bridges spanning the green milkstuff. We stop at a hotel, the second of two, the first being the ‘Highland Hotel’ – not half. A stop where we must all take off our shoes and pay £2.50 to visit the toilet.

Once again the bus turns onto a rutted black lava-sand track, the bumpiest of the lot, travelling as it does over unyielding lava flows. We can tell we are nearing Landmannalaugar when we see bright green moss carpeting the hills; the appearance is of a sci-fi unearthly place, maybe as in Tolkien’s poem;

“The world was young,
The mountains green,
No stain yet on the Moon was seen,
No words were laid on stream or stone
When Durin woke and walked alone.
He named the nameless hills and dells;
He drank from yet untasted wells;
He stooped and looked in Mirrormere,
And saw a crown of stars appear,
As gems upon a silver thread,
Above the shadow of his head.”

Multicoloured hills appear, in those volcanic colours we are growing accustomed to, and then the camp-site. We had anticipated that it would be crowded, but not that is would be a dingy, maybe even squalid patch of stony bog-ridden mud, plagued with tents, a ring of buzzing and roaring Jeeps around the edges.

Disembarking, keeping our luggage out of the mud and trudging to reception, has the flavour of WW1 soldiers arriving at Vimy Ridge or some other far flung trench, to burrow a shelter from the wind and make a home for themselves in the muddy fields.

In the rain, we put up the tent by a small river, or ditch, and looking out we can see a tiny snipe bobbing up and down – its head going like those woodpecker toys. There are three sheep across a boggy meadow and a crowd of undressed people beside a waft of steam in the middle of this meadow.

Sprengisandur is only accessible during summer and is impassable in winter because of the snow, and in spring because of floods. In medieval times, the area derived its name from the fact that for hundreds of kilometers, there was no fodder for horses, and no human habitation to take shelter in.  This feature gave the area its name: it is derived from Icelandic noun sandur “sand”, which denotes the volcanic ash deserts of the center of the island, and the verb sprengja that means “to ride a horse to death; to be on the point of bursting after running for too long”. One needed to ride as fast as possible, nearly driving the horses to death, to cross the mountain desert and reach the inhabited regions of the island again before one ran out of victuals.

Sprengisandur, the wilderness interior of Iceland

Sprengisandur, Iceland, The wide milky river seen as we start to emerge from the wilderness.

Sprengisandur, Iceland, The wide milky river seen as we start to emerge from the wilderness. 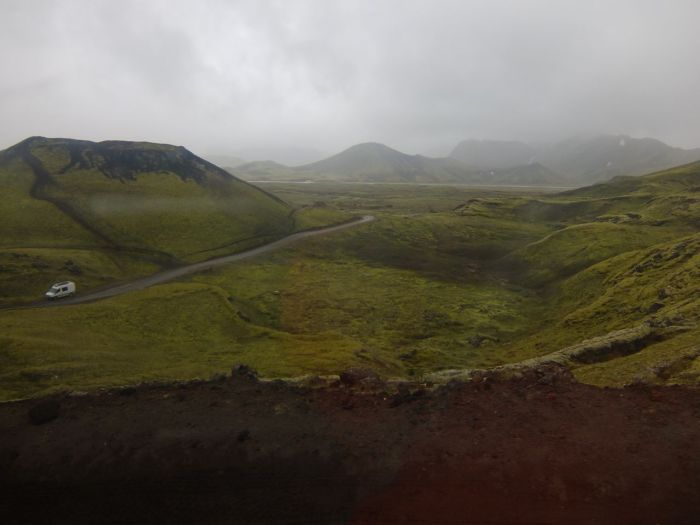 Landmannalaugar, southern Iceland, A hot Pool with multi-coloured algae that survive the near boiling temperatures. 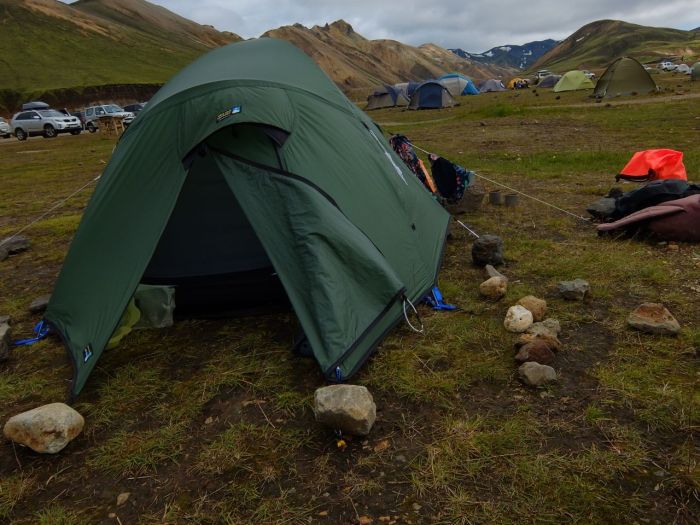 Our tent at Landmannalaugar, weighted with stones as it is difficult to get the pegs into the rocky ground.

Landmannalaugar, southern Iceland, A view of the campsite 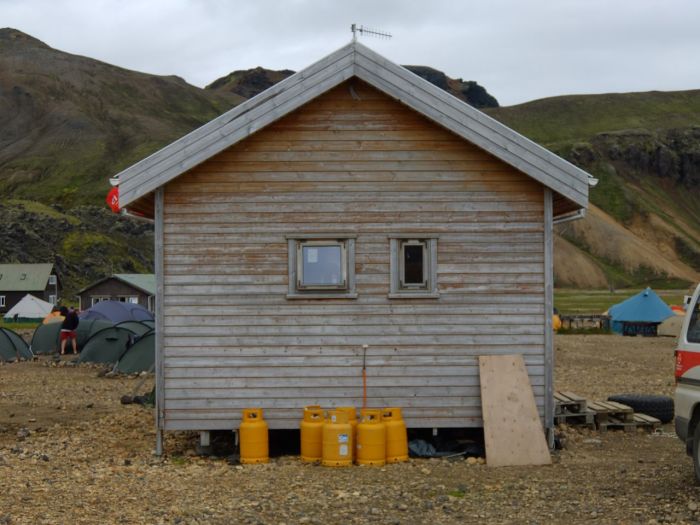 Landmannalaugar, southern Iceland. One of the huts that gives a slightly ‘trenches’ feel the area. 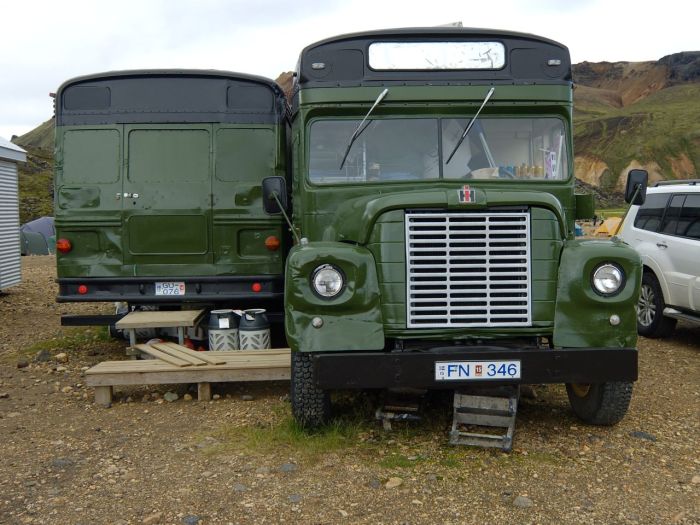 Landmannalaugar, southern Iceland, The mobile store and café that takes its place at the site in the summer. Absolute haven

Landmannalaugar, southern Iceland, Tent weighted against the wind on the stony ground

Landmannalaugar, southern Iceland, The only road in fords the river. 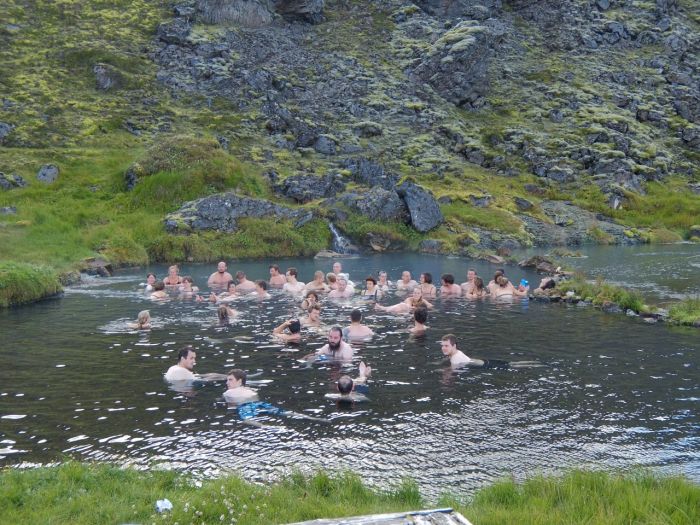 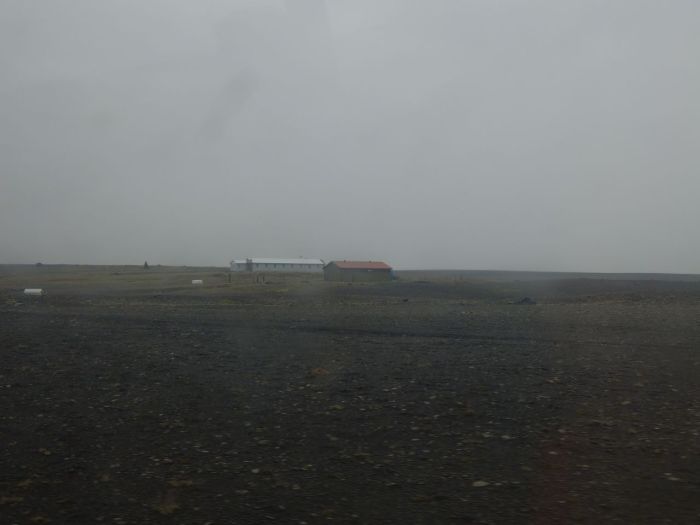 One thought on “Landmannalaugar Arrival”