Here is a post from 4 years ago –  during the long freeze.

The winter was so very cold, for so very long. It was freezing for weeks and so cold that one would go running up the road and on to the moors wearing spikes for traction on the anthracite bottle glass that seemed to grow there.  So cold that airports terminated and planes froze to the ground.    Buses skated sideways as they drew up to their stops, and people learned a new way of walking, without pushing off from any particular direction.  Handbag crampons snuggled ready at the bottom of my bag, and on the lethal patch of black ice outside the station, schoolchildren came to grief as they burst away from the doors.

The back yard was light and soft, bins and bird tables heaped high with a bounty of the crystalline white material, that was fragile enough to be a gas, and too dry and cold to be solid, or to form snowmen.  So instead, I started to make an ice rink.  A pocket ice rink right outside the back door.  Lying in bed when I thought of it, I immediately longed to get up there and then to start the process.  Would I use a hose or a watering can?  How far should it extend?  In the end, the hose pipe was not an option, as the tap was frozen, and trying to attach it to the kitchen tap led to dribbles and a freezing kitchen.  So I was left with the watering can.  Out I went, silently in the dark, to stand in the centre of the patch, twirling slowly and casting the water from the can.  As a gift from the extreme coldness, the water would freeze within minutes of being poured, my feet would freeze to the ground as I worked, and the new substance sang and sighed as it came into existence. The water formed a shiny glassy smooth surface, that was impossible to move across except on all fours.  So on all fours, the next can was poured and the next.

Every night for a week, more water was added.  Solid from liquid, solid from liquid, the thickness built up, clear and mysterious in the darkness, sometimes obscured by a sheet of new snow which had to be swept away before the next layer could be added. Some of the snow was useful for stopping sinkholes that appeared, letting water drain through before it had a chance to solidify.

When it was finished I made ice lanterns to put round the outside and we waltzed together on the backyard ice rink. 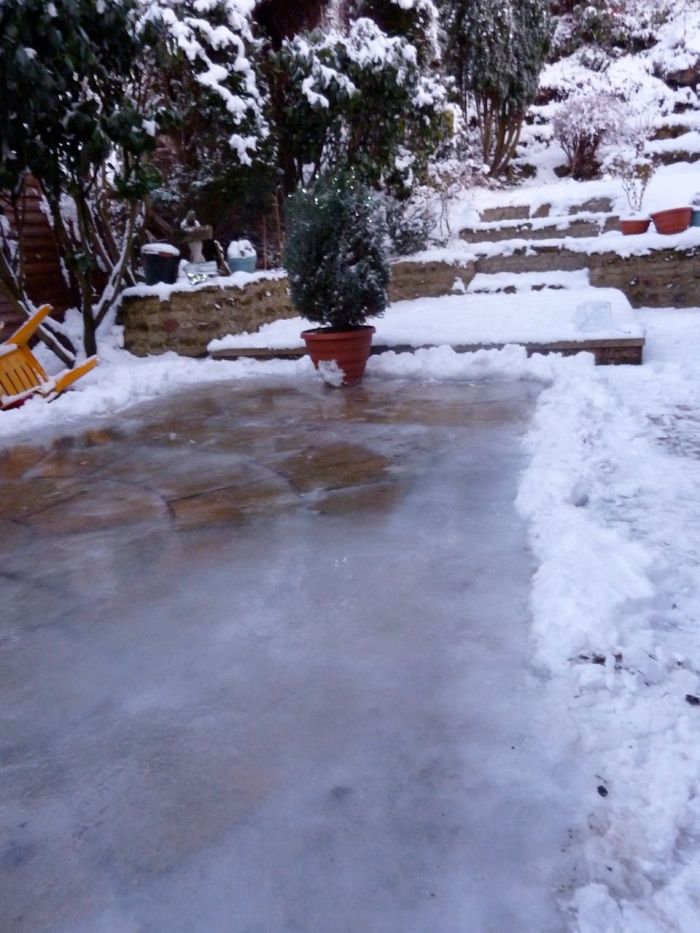 One thought on “The Backyard Ice Rink”